Fueled by an amazing entrepreneurial spirit, Northwest Arkansas emerged from modest beginnings to become one of the nation's dynamic economic regions. Industry leaders such as Walmart, Sam’s Club, Tyson Foods, Simmons Foods, and J.B. Hunt started here, and Northwest Arkansas is the home of the University of Arkansas, the state’s flagship campus. The presence of those companies and the university drives our region’s economic growth.

Our economy’s growth rate is faster than 96 of the Top 100 Metropolitan Statistical Areas (MSAs) and ranks as the #92 economy.  We have 549,000 residents ranking #104 in population, and one of the highest shares of Millennials in all occupations, ranking in the top ten.
(Source: NWA Council)

We are thriving and welcome you to join us. But don’t take our word for it – here is what others are saying about our region: 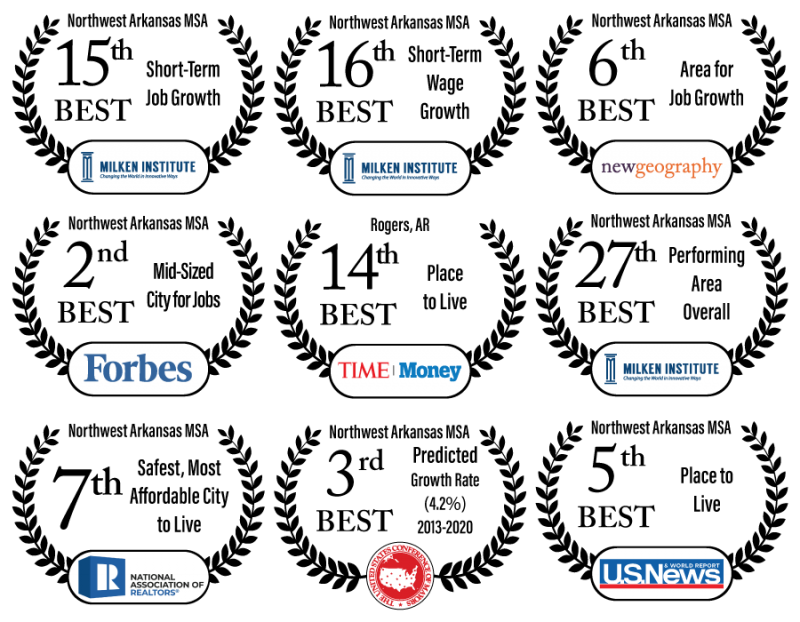 Fastest Growing Economy through 2020 | The U.S. Conference of Mayors
http://usmayors.org/metroeconomies/2014/06/report.pdf