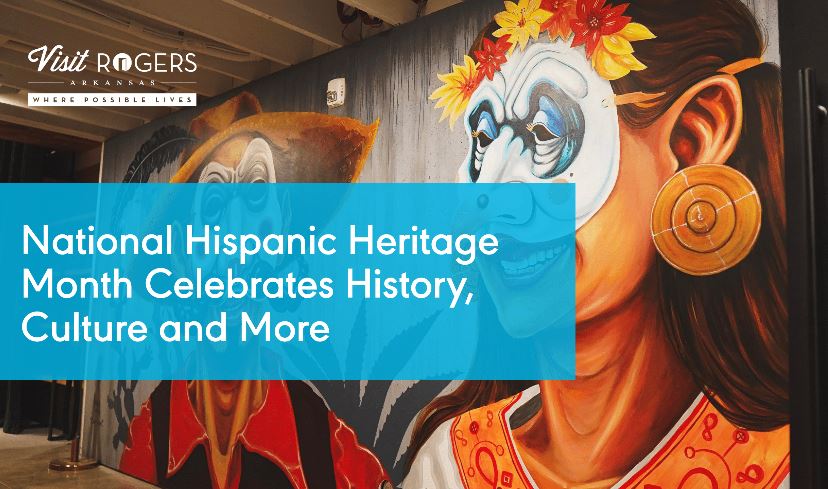 National Hispanic Heritage Month, September 15 through October 15, was a time to celebrate and reflect on the history, culture, contributions, and accomplishments of Hispanic Americans whose ancestors came from Spain, Mexico, the Caribbean, Central and South America, and other Spanish-speaking nations.

Visit Rogers, a division of the Rogers-Lowell Area Chamber of Commerce, chose to celebrate by meeting with leaders in the community and highlighting their contributions, accomplishments, and how they celebrated this year.

ARKANSAS LATINAS BIKE - Olivia Barraza, Director and Founder
Olivia planted her roots in Northwest Arkansas over 30 years ago, and in 2019 she founded Arkansas Latinas Bike alongside her sister. Olivia does not peddle to compete but to empower women in her community to get on bikes and enjoy the outdoors. As the Director of Arkansas Latinas Bike, she used the month to finalize details for the Dia de los Muertos (Day of the Dead) bike ride that will take place November 7. “We decorated our bikes with catrinas (skeletons) and catalacas (skulls), dressed up and painted our faces, and of course enjoyed music and food.” The purpose of the ride is to share our culture and traditions with the community while enjoying the beautiful trails in Northwest Arkansas.

TORTILLERIA Y TAQUERIA EL PALOMINO - Jaime Camacho, Operations Manager & Norma Camacho, Owner
Jaime and his wife, Norma took over the tortilleria and restaurant three years ago and have since expanded the tortilla and chip distributions to over 10 locations in Northwest Arkansas. The restaurant’s authentic recipes have been carefully curated by Norma who shares her love for Guanajuato, Mexico through her food. “National Hispanic Heritage month gives us a time to celebrate our contributions and share our culture with the community,” she said. Jaime said their menudo and barbacoa are a must-have. The family typically celebrates September 16 at a restaurant, however, this year they chose to order takeout and celebrated at home while reminiscing on the family’s history.

ROGERS PARKS & REC - Cesar Aguilar, Responsible for Youth Soccer and Adult Soccer
Cesar first joined Rogers Parks & Rec in 2007 and officially took his current role in 2016 with only 800 players, a number that has since grown to over 1,200. “ Rogers is a hidden secret,” he said. To Cesar, National Hispanic Heritage Month is a time to make a presence and support our leaders who represent our communities. He does this within the soccer community setting regulations and requirements. “We are a bridge that helps kids just starting with soccer and pushes them to their fullest potential to join bigger teams and become leaders,” he said. Cesar has been a coach, mentor, and leader in the Northwest Arkansas soccer community with a mission to showcase new up and coming talent year-round.

METROPLEX EVENT CENTER - Fredy Romero, Owner
Metroplex Event Center has been in Rogers for 16 years and the second location in Springdale for seven years. Fredy got his start in the events industry as a radio DJ and later provided mobile DJ services for the Metroplex before buying out the business. “This month is about sharing our heritage with friends, neighbors, and their families while asking them to join us in celebrating the history and culture of our people,” he said. As a minority-owned event center, his patrons have the confidence to celebrate their traditions whether that be through preferred meals, drinks, holiday celebrations, and entertainment. In the past Metroplex Event Center has hosted celebrations in honor of Hispanic Heritage, Cinco de Mayo, several multicultural organizations, fundraisers, and prom events for local High Schools. Fredy looks forward to being able to host these again in the future.

LOCAL ARTIST & SINGER - Maria de Lourdes Valverde Galindo
Lourdes Valverde relocated to Northwest Arkansas in 2015 and dove right into the arts and culture scene with a goal to open doors for Hispanic artists and opportunities for new events and activities. She said, “Let’s take advantage of our culture and share with the community.” She has participated in art exhibitions across Northwest Arkansas and Little Rock with her work of the Aztec Calendar and more recently participated in the Downtown Rogers Art on the Bricks “Celebrate
Diversity” exhibition from September 15 to October 15. Lourdes is on a mission to work with local museums translating their exhibit tours to the Spanish language. Additionally, Lourdes worked with the Museum of Native American History (MONAH) to celebrate Dia de los Muertos (Day of the Dead) virtually on October 31. She is looking forward to the in-person event once again in 2021.

A Growing and Diverse Community
These contributions and accomplishments can be celebrated year-round by supporting local shops and restaurants, attending local events, playing outdoors, enjoying movies and music, and of course sharing experiences via social media. Visit Rogers strives to increase awareness and support of the cultures and history of our growing and diverse community that make Rogers a world class destination. 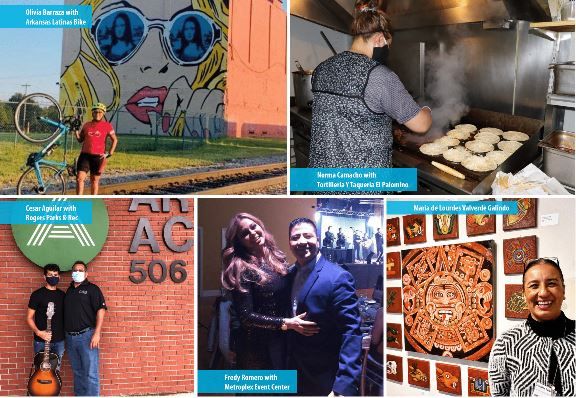