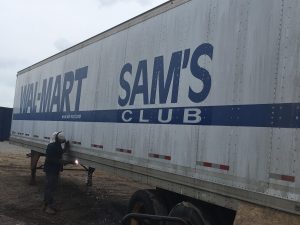 EcoVet Furniture was one of just 15 businesses nationwide featured in Parade Magazine’s Earth Day issue in April.  This successful small business is a veteran transition company in Rogers. The company designs and builds handcrafted furniture using reclaimed wood. It also employs primarily veterans who have previously been deployed overseas and are currently enrolled full-time in a higher education program, giving them a flexible schedule and an ability to earn a living wage.

Making a Difference for the Environment
One example of the creative reuse and recycling at EcoVet is their range of sustainable furniture products made with the reclaimed maple and oak floors of scrap semi-trailers. EcoVet’s wood needs no artificial treatment. “Around 90 percent of semi-trailers usually end up being shredded and go to a landfill,” CEO Mike Hagood said. “By doing what we do, we can repurpose them and give them a second life which is great for the environment.”

2017 Small Business of the Year Award
EcoVet is still in its infancy, but has already received numerous awards and accolades, including the Rogers-Lowell Area Chamber of Commerce’s 2017 Small Business of the Year Award. The business is growing at a tremendous rate, and will soon launch an eCommerce website, allowing customers to purchase products online. Though the company has received some national acclaim, Hagood says giving back to the community is something that is very important to him.

It would be easy for us to decide to move somewhere where the unemployment isn’t so low, but we love living in Northwest Arkansas and being able to help our veterans locally,” he said. “We have had veterans traveling through the area from across the United States to tour our facility, so we are glad we can help Rogers get its name out there. We really believe the area is turning into a great destination for visitors. 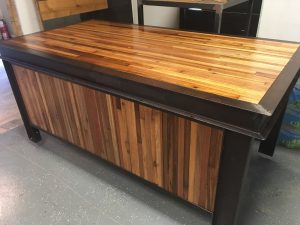 Ask anyone at EcoVet Furniture and they will tell you that no other reclaimed wood product tells such an interesting story. The furniture is crafted with the precision and character that is representative of those who make it. “You can’t go to any other furniture store and buy what we build,” Hagood said. “About 20 percent of our business now is wood on walls, we’re starting to sell a lot of lumber. You will see a lot of new stuff in the next few months, so we encourage anyone who needs custom furniture to keep an eye on us.”